THE UNIVERSE IS 75% HYDROGEN MAKING IT THE MOST ABUNDANT MOLECULE IN THE UNIVERSE. H2 IS THE HEALTHIEST FORM OF HYDROGEN AND WHEN H2 IS MADE AVAILABLE TO YOUR CELLS, IT BECOMES A MASTER PROTECOR, GUARDIAN ANGEL MOLECULE.

LETTER FROM THE DOCTOR

Dr. Juergen Winkler M.D., ABIHM is a Board Certified Doctor in Holistic and Integrative medicine. He is presently practicing at Quantum Functional Medicine in Carlsbad, CA which he founded in July 2012. He is a Board Member of the International Organization of Integrative Cancer Physicians (IOICP).

The world is becoming constantly more complicated. So much information is available out there regarding health and wellness, it’s often difficult to discern what’s real or simply marketing hype. Even in the news you hear about keeping your cholesterol down, preventing cancer, fad diets, the right exercises and so on. Do you ever feel like you can’t keep up?

On a regular basis I see patients with a variety of health problems starting earlier in life. Just listening to the radio reminds me of the increased rate and risk of autism. When I look around our environment I see more smog, pollution, more health robbing chemicals that are in the products we use on a daily basis.

Even though the information and misinformation may be overwhelming, we can bring it back to the basics. If you could do one thing everyday to help keep or increase your vitality, rejuvenate your body, recover from workouts quicker, and stay healthy, would you take advantage of it?

Molecular Hydrogen is a remarkable molecule capable of making a dramatic difference in your health. It’s benefits pertain to everyone because it acts on your antioxidant defense system, a crucial part of healthy living and hopefully it will motivate you to integrate it into your life.

WHAT IS MOLECULAR HYDROGEN? 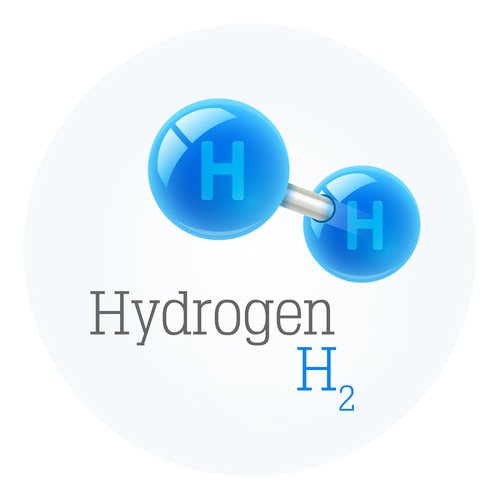 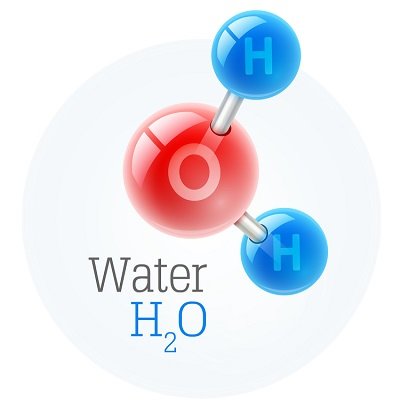 The unique properties of water occur via hydrogen bonding. Hydrogen atoms are critical components in water as well as many other organic molecules such as carbohydrates, proteins, lipids and DNA.

HYDROGEN, THE SMALLEST ELEMENT IN EXISTENCE

Hydrogen (H) appears in the top left corner of the periodic table and is denoted as 1. The periodic table is an arrangement of chemical elements, ordered by their atomic number, which is the number of protons. It contains one proton and one electron with no neutrons. This means that the element hydrogen is the smallest, simplest and most fundamental element. This makes Molecular Hydrogen (H2) the simplest molecule in existence since it’s a bond of two of the smallest atom. 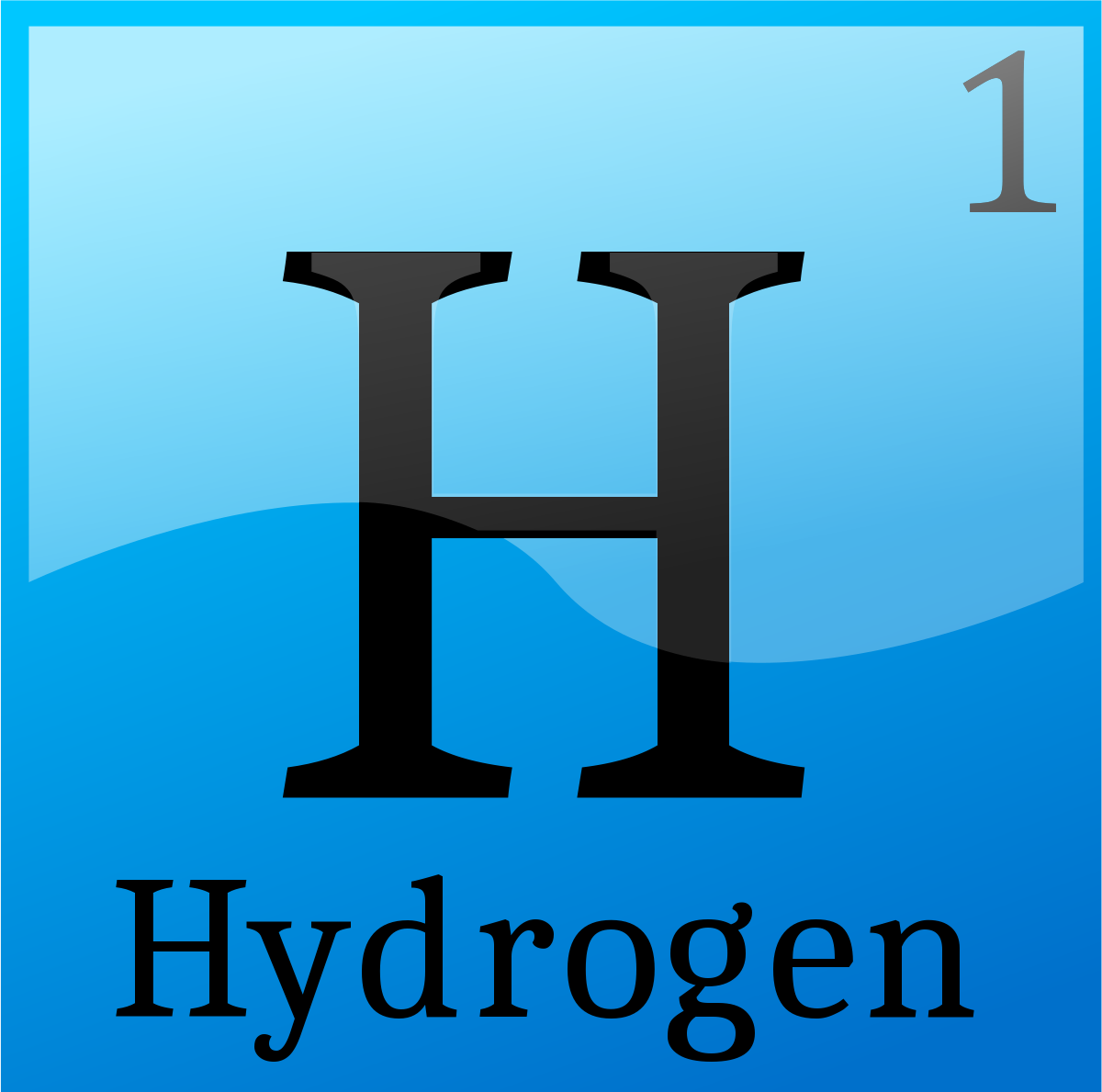 Because H2 is so small, it exists as a gas in normal temperatures and pressures. You may have heard of H2 being referred to as hydrogen gas. Hydrogen gas has been the main focus of clean energy because burning it as a fuel generates water vapor as a byproduct instead of the toxic pollution that is produced by burning gasoline.

When you think of hydrogen, you may think of positive hydrogen ions (H+) which are also called protons. pH is a measurement of the amount of H+ ions that exist in a liquid. The lower the pH, the more protons there are in the liquid and greater the acidity. This is different from the hydrogen we are talking about, which is Molecular Hydrogen (H2).

Although H2 is a seemingly simple molecule, it provides a variety of health benefits that we are still discovering today. The benefits that H2 can provide have been confirmed time and again over the last 10 years even though it has been overlooked for a long time. Now over 300 research studies show the benefits of H2 in a variety of disease models.

WHY HAVEN'T I HEARD OF H2 FOR HEALTH?

The reason why you probably haven’t heard that H2 is beneficial for your health is because “it’s too simple”. H2 can’t be patented, which means it’s not going to be profitable as a pharmaceutical drug. Therefore, not many resources have been allocated to promote H2 in mainstream media.

Also, H2 seems to be “good for everything” at first glance. Since H2 works on the antioxidant defense system inside your cells, its effects vary from person to person. That’s because free radicals affect each of us in different ways. This may be a difficult concept to grasp and some people end up not believing because it sounds “too good to be true”.

Despite these reasons, progressively more academics and researchers have documented the undeniable evidence for the benefits of H2 on human health. The research on molecular hydrogen has grown exponentially over the past 10 years.

The most significant way that H2 promotes optimal health is to enhance your antioxidant defense system and neutralize harmful free radicals directly.

THERE'S A WAR WAGING WITHIN YOUR CELLS

Your cells are constantly under attack by free radicals. Free radicals are byproducts of energy production from your mitochondria, the engines of cells. A free radical has an unpaired electron and wants to satisfy it by taking an electron from a molecule nearby. Free radicals are short lived, unstable and react with other molecules to achieve stability. The scientific term for free radical is Reactive Oxygen Species (ROS).

Long-term free radical damage, also called oxidative stress, has been linked to aging and most chronic diseases such as cancer, diabetes, neurodegenerative diseases, cardiovascular disease and more. That’s why antioxidants have been a primary focus and keyword in the nutritional supplement industry since the beginning.

FREE RADICALS ARE CONSTANTLY PRODUCED IN YOUR MITOCHONDRIA

Mitochondria are responsible for producing energy in the form of ATP (currency of energy in your cells), but they also produce free radicals as a toxic byproduct. Oxygen is critical in driving energy production. Unfortunately, 2-5% of the oxygen utilized in energy production convert into Free Radicals called Super Oxide Anions.

Another antioxidant enzyme is Glutathione Peroxidase (GPX). Two GPXs convert one Hydrogen Peroxide into two molecules of water. During this reaction the two GPXs bond together to form Glutathione Disulfide (GDS). GDS needs to be recycled by another enzyme to convert back into 2 GPXs ready to take on more Hydrogen Peroxide molecules. This means that GPX is not always readily available and there’s a limit to its function as an antioxidant.

This two-step process of eliminating free radicals inside your cells is crucial for the health of your cells. If there’s not enough Superoxide Dismutase and Glutathione Peroxidase available, Superoxide Anion and Hydrogen Peroxide can build-up in your cells. These free radicals themselves may not be that bad, but they react with each other to form a deadly free radical, the Hydroxyl Radical.

EXCESS FREE RADICALS ARE DANGEROUS TO YOUR CELLS 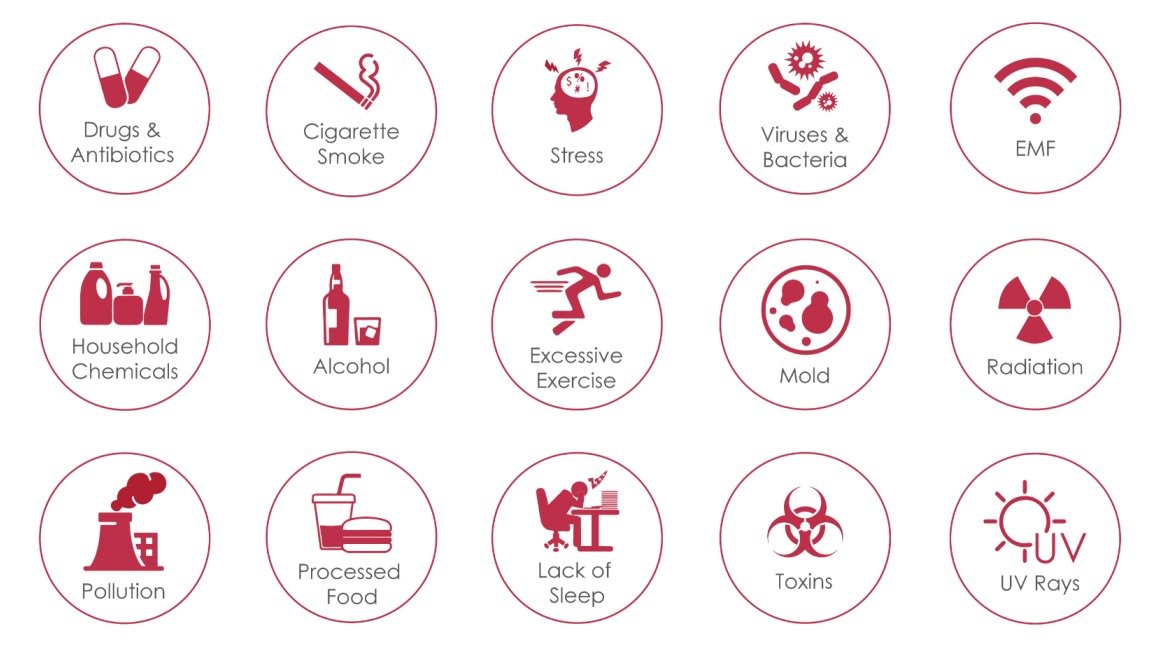 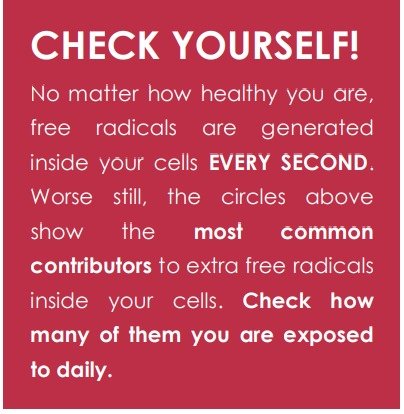 When free radicals aren’t eliminated quickly, they convert into more dangerous free radicals. For example, Hydrogen Peroxide readily converts into the most dangerous Hydroxyl Radicals in the presence of Iron (in blood cells) or other transition metals.

Hydroxyl Radicals can also be produced in your cells when you are exposed to Radiation, UV rays, or Electromagnetic frequencies (EMF). These are highly energetic waves that penetrate into your cells and break up water. Sometimes water splits into a Hydroxyl Radical. 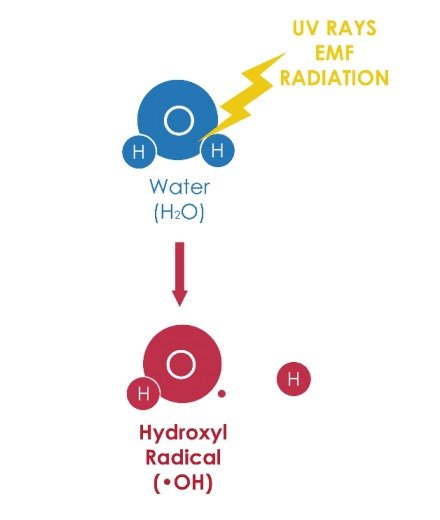 Hydroxyl Radicals are highly reactive free radicals that will steal an electron from any other molecule, thereby damaging them. Notice how similar they are in structure to water. All they need is a hydrogen atom to become water. Their desire to stabilize into water is so powerful that they can easily rip off hydrogen atoms and electrons from any molecule around them to satisfy themselves. Usually the victims are DNA, proteins, and lipids that make up your cells. 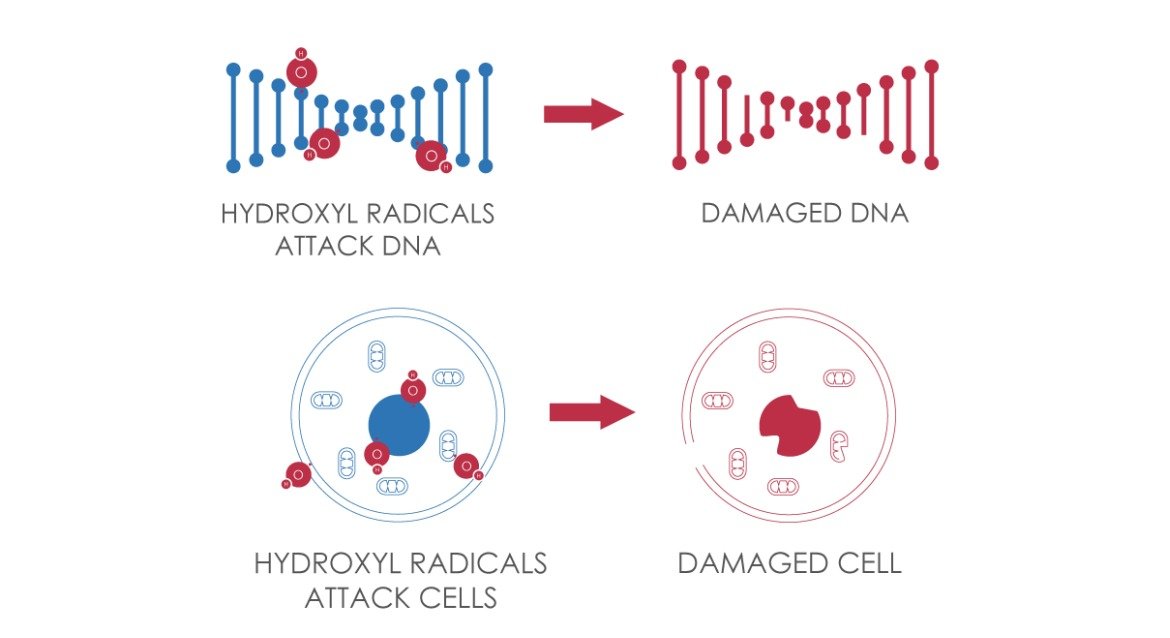 FREE RADICAL DAMAGE IN YOUR CELLS IS CALLED OXIDATIVE STRESS

Oxidative Stress occurs when there is a disturbance in the balance of free radicals and antioxidants leading to the formation of Hydroxyl Radicals that cause irreversible damage to cellular molecules. Oxidative Stress is known as the cause of many different health challenges and it affects each individual differently depending on genetics.

If you feel that you’re not as healthy as you should be, the root cause is most likely Oxidative Stress. You need to boost your antioxidant defense system so that it can neutralize excess free radicals efficiently. You can enhance the antioxidants inside your cells by supplementing your diet with antioxidant-rich foods, following a healthier lifestyle and utilizing H2 (energized) water.

WHY IS H2 THE PERFECT ANTIOXIDANT? 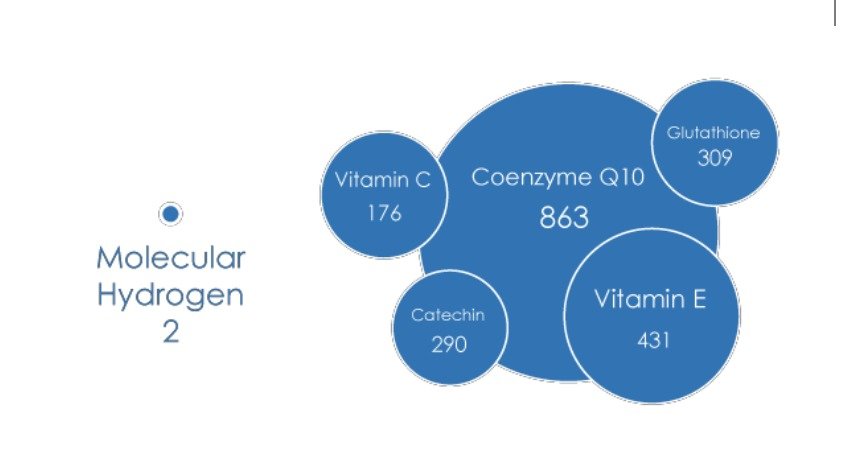 H2 is the smallest antioxidant in existence. Other antioxidants such as Vitamin C or Vitamin E are very large molecules compared to H2 and need to go through your digestive tract, absorbed in your intestines, travel through your blood and enter into your cells before they can eliminate free radicals.

H2 is so small that it can penetrate through your stomach lining to begin acting inside your cells immediately. H2 is also in a gaseous state, so it basically floats through your cells (rapid diffusion) and performs its function as an antioxidant undeterred by the normal mechanisms that prevent other antioxidants from moving freely through the body.

H2 can also cross the Blood-Brain-Barrier easily due to it’s small size whereas other antioxidants have a difficult time getting through or can’t get through at all. The brain is highly susceptible to stress because it consumes 20% of the oxygen you breathe despite being only 2% of your body's weight. So it's very important to protect your brain with antioxidants since it’s especially vulnerable.

H2 is selective and targets only hydroxyl radicals. This is a key benefit because H2 only eliminates the harmful free radicals but does not directly affect useful free radicals such as hydrogen peroxide or nitric oxide. Like we mentioned before, hydrogen peroxide is used by the immune cells to kill bacteria and nitric oxide is a signaling molecule that helps open and close blood vessels that divert blood to different areas of the body. 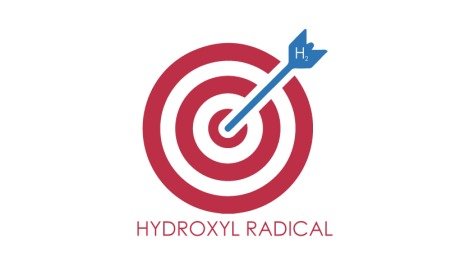 Each molecule of H2 can convert two hydroxyl radicals into water, hydrating your cells in the process (Figure 1). Therefore, even at high concentrations, H2 has zero toxicity. Any excess H2 simply gets released from the body. Other antioxidants become weak free radicals themselves after neutralizing free radicals. For example, Ascorbic Acid (Vitamin C) becomes an Ascorbyl Radical (Figure 2).

H2 not only neutralizes hydroxyl radicals directly, it helps enhance your antioxidant enzymes such as gluathione peroxidase, superoxide dismutase and catalase. Eah specific antioxidant enzyme and molecular hydrogen itself take care of different types of free radicals. All of these antioxidants work together to ensure there are no excess free radicals that can cause oxidative stress damage inside your cells. 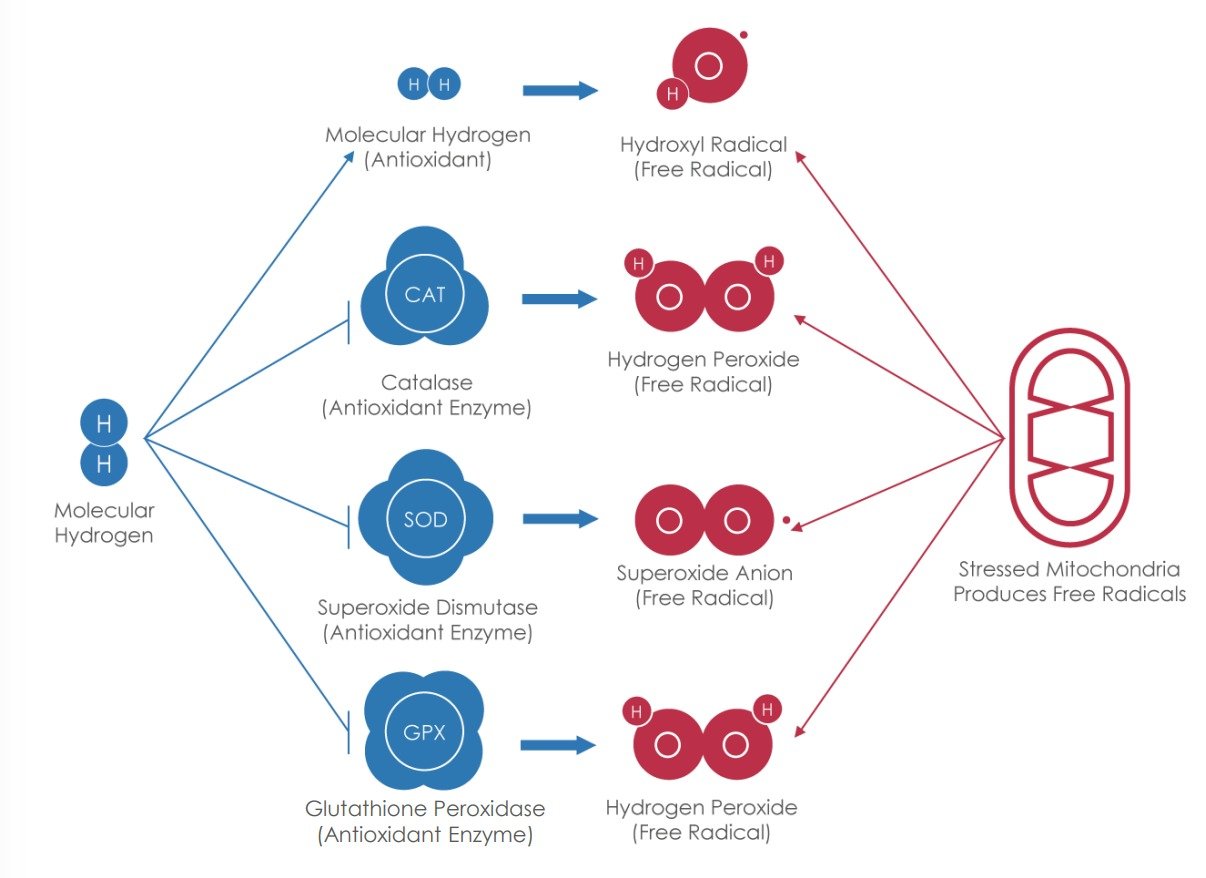 As shown in the figure above, H2 is able to support your antioxidant enzymes and directly eliminate the most dangerous hydroxyl radicals. H2 offers full protection against free radicals without disrupting the balance of free radicals and antioxidants inside your cells. Molecular Hydrogen is clearly superior to all other antioxidant supplements due to these four reasons.