Celestine Water is produced through the combination of electrolysis and quartz crystal which provide the required Energy necessary to resemble Living Water. Electrolysis provides the filtering, hydrogen, alkalinity and bioavailability. Quartz Crystal is used to produce the liquid crystal (hexagonal) molecular structure which is bio-water aligned.

The elctrolysis process is produced through a reputable Japanese organization which has over 50 years of producing electrolysis technology. Enagic, called Kangen Water which means "Return To Origin" provides the first step for Celestine Water.

Electrolysis uses electricity to split water into hydrogen and oxygen. This reaction takes place in a unit called an electrolyzer. The result of this process is scientifically termed electrolyzed reduced water (ERW). 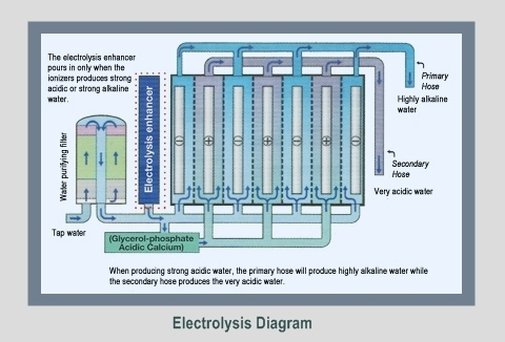 The diagram illustrates the basic functions of energized water technology. Water flows through a high-grade carbon filter to remove trace organic and inorganic water contaminants. This filtered water then flows over a series of 7 platinum coated titanium plates where the platinum acting as a catalyst provides 230 watts of electrical power "energy" to pass through the water to ionize, which is the process by which an atom or a molecule acquires a negative or positive charge by gaining or losing electrons. The process of ionization produces the structural and chemical changes in the water to mimic healing water around the world.

The unit sits on the counter and the water flows through it via a connection hose to the water supply. The water flowing out of is divided into alkaline water that comes from a hose that extends from the top of the unit and acid water that flows out of a gray hose that extends from the bottom of the unit; both alkaline and acid water have unique and beneficial uses. 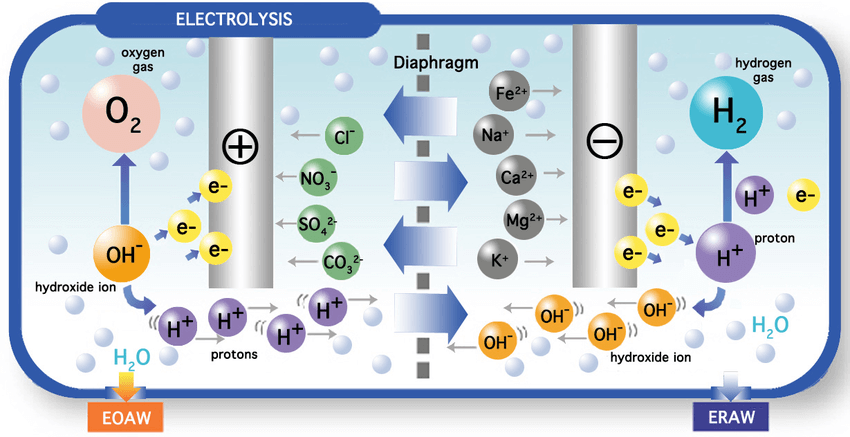 1. The generation of hydroxide (OH-) ions and Hydrogen (H2) as Hydrogen Rich Alkaline Water (ERAW), this occurs due to electrons (e-) being provided from the negative charged plate. This water is used for drinking and resembles the properties of living water.

2. The generation of hydrogen (H+) ions and Oxygen (O2) as Oxygen Rich Acidic Water (EOAW), this occurs due to electrons (e-) being taken away from the positive charged plate. This water is used for sanitization such as cleaning household items and topically on the skin as a toner.

Crystals are millions of years old and were forged during the earliest part of the earth’s formation. Crystals are a timeless database of knowledge, because they retain all the information they have ever been exposed to. Crystals absorb information—whether a severe weather pattern, or the experience of an ancient ceremony—and pass it to anyone that comes into contact with them.

Scientifically, crystals are the most orderly structure that exists in nature, meaning they have the lowest amount of entropy (a measurement of disorder). Crystals are structured in such a way that they respond to the inputs of all different energies around them, so they oscillate, emitting specific vibratory frequencies.

The way they are balanced, the frequencies they emit, and their ability to store a tremendous amount of information makes crystals essential to modern technologies. This is why there are crystals in computers, TVs, cell phones, satellites, and so on.

Our ancestors intuitively knew the energies of the crystals would interact with the human electromagnetic field to bring about energetic changes.

Crystals are resonant with the frequencies and harmonic energies of Earth (being from Earth themselves), and thus will resonate (vibrate harmonically, or in sync) with water. As both liquid crystal (water) and solid state crystal (quartz) are both part of the crystalline family, there is a sympathy between these two systems. Quartz has an energetic relationship and harmony with water as their molecular structures are based on geometries that fit perfectly, allowing for resonant information transfer.

Water is able to absorb the information of any external influence that it has been exposed to, thus when exposing water to a solid crystal the water will absorb the information contained within the crystal specifically the energetic geometric pattern that is contained within the crystal. This will produce the structured/hexagonal molecular structure of liquid crystal water which is the same water as 99.5% of the molecules in the human body.

The easiest means of having the water produced through electrolysis is to pour the water into a solid-state quartz crystal infused glass bottle which will alter the structure the water.